8 February 2018: 2017 was an exceptionally strong year for Australian companies floating on the Australian Securities Exchange (ASX). According to the OnMarket 2017 IPO Report, which details Australian Initial Public Offering activity, IPOs that listed in 2017 returned an average 61.6% from their listing date through to December 31, 2017. This was an impressive 54.6% outperformance of the benchmark S&P/ASX 200 index, which had a solid 7.0% return in 2017.

o   Cann Group (ASX: CAN) – listed on the ASX in Q2, raising $13.5 mil. at $0.30 per share. CAN returned 813.3% by year-end. CAN was the first Australian company to secure the necessary licences to undertake research and to cultivate cannabis for human medicinal purposes.

One of the most interesting sector trends in 2017 was the number of medicinal cannabis stocks to list on ASX. In total there were 6 medicinal cannabis companies to list on the ASX in 2017, with two of those companies part of the top 10 performers for the year. They are Cann Group (ASX: CAN) and The Hydroponics Company (ASX: THC) with an 813.3% and 240.0% return at year-end. 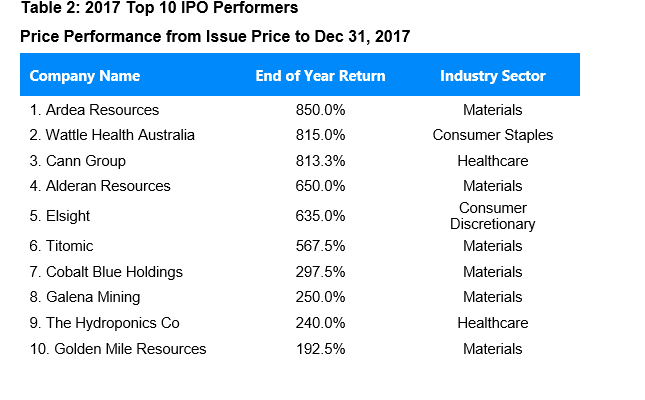 OnMarket CEO Ben Bucknell, said, “In last year’s 2016 IPO report, we noted the outperformance of smaller IPOs over large IPOs and we forecasted a strong year ahead. This prediction proved to be correct with the trend continuing in 2017 with IPOs raisings of less than $50 million returning 69.8% to investors.
“Most institutional investors are not permitted to invest in smaller IPOs which means that there is room for self-directed investors to access returns. OnMarket was able to offer more than 1 in 3 ASX IPOs to retail investors in 2017. Our aim in 2018 will continue to be delivering capital to companies and outperformance for self-directed investors.

OnMarket is the world’s first app for crowdfunding IPOs. Investors from any broker can sign up, bid and invest in companies without paying any commissions or brokerage. The OnMarket app is available in the App store and Google Play.

OnMarket makes investing and capital raising an efficient, simple and transparent process that is accessible to everyday investors and businesses. OnMarket has offered 1 in every 3 ASX IPOs to investors since launch.

OnMarket is one of the first platforms in Australia to be granted an equity crowdfunding licence by ASIC.  This enables OnMarket to offer equity crowdfunding, which connects all investors with businesses that are making a change for the better. By investing in companies offering equity via OnMarket, everyday investors can share in the upside in businesses that ultimately will make a better, smarter, more sustainable world.

For further information go to www.onmarket.com.au