"This is the app that Malcolm launched" 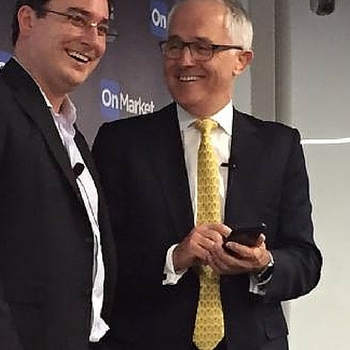 It was a very, very big day. We are honoured that the Prime Minister of Australia, Malcolm Turnbull, launched OnMarket to a room full of our fintech colleagues and friends. It was standing room only, and with over 200 in attendance there was a palpable buzz in the room.

Angus Taylor MP, Member for Hume and long-time supporter of fintech, enterprise, and innovation introduced the event by saying that he first saw the problem that OnMarket is trying to solve just after the Global Financial Crisis when capital raisings were essentially given away to institutional investors at large discounts. His thought then that there was a problem that needed to be solved, that the capital markets were ripe for disruption – and that OnMarkets has presented a solution.

The Prime Minister noted his own entrepreneurial experience has been mixed, with successes and failures, but most of all – a lot of learning. His view was that the culture of failing and getting up again was key to innovation, and that technology, openness, and consumer empowerment were all key features of a culture that his government was committed to promoting. PM Turnbull also cut the ‘digital ribbon’ by putting in the very first bid into the OnMarket system, on Ben’s behalf, into the Bitcoin Group IPO – the first deal live OnMarket.

Ben summed it up perfectly: “Why are IPOs called Initial Public Offerings when there’s no element of an offering to the public? Last year only 16% of IPOs were offered to the public. Why shouldn’t each of you be able to bid in on exactly the same terms as the big end of town.”

Indeed, as Ben said, “borne out of the belief that technology can be used to empower investors” OnMarket is putting the ‘public’ back into Initial Public Offerings.

We were thrilled with the PM’s ringing endorsement of OnMarket: “The brilliance of this application is that it makes it easier to buy, easier to trade. Inevitably, this app will open up the investor market considerably.”