Fintechs to shape the future of finance 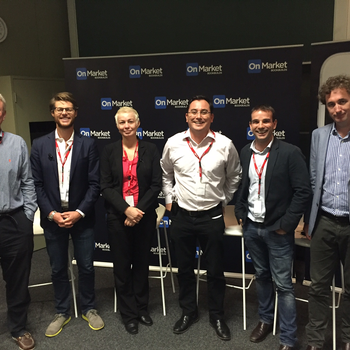 Fintech companies are moving in on traditional financial services providers as their products and services gain popularity, grabbing market share and talent while forcing down costs. Traditional jobs will be lost and even one of the big four banks could disappear, according to a panel of fintech experts who spoke at a recent Future of Finance seminar hosted by OnMarket BookBuilds.

Almost 200 students attended the seminar, which was held at the University of New South Wales on May 11 and co-hosted by the University Network for Investing and Trading (UNIT).

One of the panellists, Ben Bucknell, chief executive officer of fintech OnMarket BookBuilds, said graduates should be question a career path with a traditional financial services company where their opportunities to expand their skills may be limited by a lack of opportunity and innovation. All panellists agreed that larger institutions such as the big banks and investment banks are encumbered by their size, old IT infrastructures and traditional way of doing things.

“You may find yourself churning the wheels at a traditional institution. Fintech businesses are more creative, which is very attractive to young people who will have the opportunity to do different things and learn a wide variety of skills within a fintech organisation.  We’re aiming to draw them to fintech before they get trapped in a middle-office role preparing PowerPoint presentations just to feed an outsized mortgage,” Bucknell said.

Fellow panellist, Jost Stollmann, chief executive officer of Tyro Payments, a fintech which holds a banking license, said the emergence of ‘fintech hubs’ such as the TyroFinTechHub will support graduates willing to explore a career in a disruptive organisation and give them opportunity to network with like-minded people. At the same time, Stollmann sees the death of some of the incumbent organisations, and joining them in their demise could be a dead-end for today’s graduates.

“The big four banks cannot afford to be arrogant. They have millions of customers and deep pockets with which to invest – so what? Unless the banks can unbundle their products, overcome their legacy infrastructure and compete with low-cost ‘provider agnostic’ digital platforms, they might well cease to exist.”

According to a recent Frost & Sullivan study, Fintech in Australia – Trends, Forecasts and Analysis 2015 – 2020, the Australian fintech sector is set to take $10 billion in aggregated revenues away from the big Australian banks and contribute $3 billion of new revenue to the Australian financial services sector from 2015 to 2020.

Another panellist, Doug Morris, chief executive of Sharesight, an online share portfolio management software business, predicted the death of some traditional financial services roles. “Traditional financial services distribution and marketing jobs are under threat. I'd encourage [university graduates] to gain experience in analytical, data-driven, marketing if possible. This skill set permeates most fintechs,” says Morris. “It's clear that there are fewer qualified candidates joining investment banks, for example, and they are going to tech companies instead.”

Another panellist, Georgia King-Siem, a senior manager with KPMG, said the best time for graduates to join a fintech or start their own business is right after university when they can afford to test the waters and try their hands at their own ventures without having the weight of a mortgage and other financial commitments around their necks. But will all fintechs survive? No. Only fintech businesses that truly innovate will stand out and win market share.

“Understanding and embracing innovation and the disruption it brings is necessary for survival – we must evolve or face extinction. On the flip side, those that innovate effectively will have a greater opportunity to increase profitability, productivity and develop a sustainable competitive advantage,” she said.

Stollmann said Australia cannot afford to be complacent. “More and more of this country’s best and brightest minds are leaving the big banks in order to start their own business and reinvent banking. The government, regulators, and the wider community should encourage and enable these entrepreneurs and their efforts. We are well-placed as a country to lead ‘Nextgen’ banking and it will take courage and commitment to get us there,” he said.