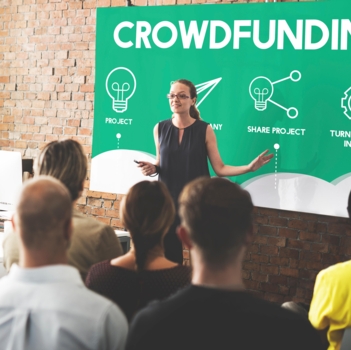 You already know that crowdfunding is disrupting the investment landscape with focus on not only financial returns, but also social benefit. Can crowdfunding break any more barriers? Apparently so.

A report by PwC, ‘Women Unbound’, shows that crowdfunding is challenging embedded gender bias in the entrepreneurial and finance industry. We are seeing women-led crowdfunded campaigns reaching their target more often than campaigns led by the historically favoured men.

Unfortunately, it’s an established norm that less women lead start-up and early growth businesses than men. Research from PwC indicates that investors, especially venture capital (VC) investors, prefer a pitch from a male, rather than from a female entrepreneur, even if both pitches are essentially the same. Just look at the numbers. Men in the US, on average, start their business with nearly twice as much capital as women. And it’s not just the US. For 220 early-stage, digital businesses in the UK, male entrepreneurs were 86% more likely to be VC funded than their female counterparts. Shinjini Kumar, manager at Citibank India, confirms the unfortunate truth,

There is definitely a bias…it comes from the idea that women are too conservative to scale up or that they will leave the business – for a VC that is something that plays.

A primary reason contributing to this lower proportion of women leading early-growth businesses is the ‘grey-suit’ factor. The people making all these VC investment decisions are predominantly men in grey suits, who may have an inherent bias to choose male entrepreneurs, or, for some reason, believe that women-led businesses won’t provide any return or are riskier investments.

Crowdfunding, on the other hand, is a totally different ball game. The investment decision-makers are no longer these ‘grey-suits’. It’s the people. We have a bunch of micro-VCs, who replace the ‘grey-suit’ factor with the ‘someone-sitting-in-front-of-a-computer-in-shorts-and-a-T-shirt’ factor. Crowdfunding’s gender-equalling playing field has enabled and empowered several female entrepreneurs. For example, Jetpack, a peer-to-peer delivery service that delivers ‘emergency supplies’ (e.g. a charger or energy drink) to college students, is run by female Stanford student Fatima Dicko. How well did this equity crowdfunding campaign do? They intended to raise US$50K and ended up raising US$251, 470. That’s 502% more than what they aimed. Fatima claims that, ‘This fundraising method [equity crowdfunding] will democratise how capital is deployed to underrepresented entrepreneurs’ and goes on to assert that, ‘the current VC system is very broken’. [1]  Could Jetpack have raised more if led by a male? Who knows, but this is another example of how females have enormous potential in the crowdfunding business.

So, why is crowdfunding proving to be the magical solution for females to access capital? Well, apart from eradicating the ‘grey-suit’ factor, PwC states that female crowdfunders tend to use more emotional and inclusive language in their campaigns, which appeals to all crowdfunding investors (male and female) and is found to be positively correlated with fundraising success. If we look at all the crowdfunding campaigns across 2015 and 2016, we see that those led by females were 32% more successful than those led by men. Even if we move away from the big picture and start slicing up the data, we still find that women secured their funding goals more than men for every business sector and every territory. Supposedly ‘more masculine’ sectors are being flipped upside down. For example, in the technology industry, where there is 1 female entrepreneur for every 9 male entrepreneurs, females were still more successful than males in achieving their crowdfunding goal.

The findings of this research present another great reason as to why female entrepreneurs should have self-belief and confidence.

With equity crowdfunding now in Australia, female entrepreneurs have every reason to be filled with excitement. You no longer need to search for the key to unlock doors to access capital. Equity crowdfunding will bust them wide open.

To read our comprehensive guidebooks showing you how to raise capital for your business go to www.onmarket.com.au.