A View From Inside The World's First PolicyHack 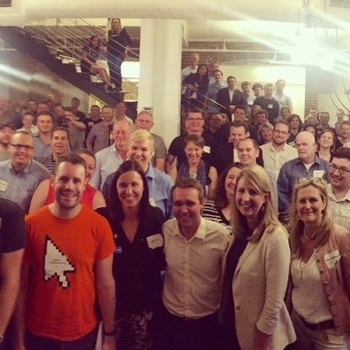 There was a motley crowd of suits, jeans, and cameras loitering outside a CBD office building at 7:50am on Saturday. All keen participants in the world’s first PolicyHack, put together with impressive efficiency by startup accelerator BlueChilli, the office of the Assistant Minister for Innovation Wyatt Roy, and lobby group StartupAUS.

PolicyHack brought together 100 representatives of the Australian start-up community (from every state and territory and including entrepreneurs, VCs, and CEOs) and 50 public sector employees. The agenda was ambitious – apply a hackathon approach to policymaking.

The results of tech hackathons have been impressive. Facebook’s “Like” button and Facebook Chat are products of internal hackathons. The GroupMe messaging app, bought by Skype for over $50 million, was conceived at a hackathon.
At PolicyHack, we weren’t building websites, mobile apps, or robots – we were coming up with MVPs (Minimum Viable Policies) in answer to 10 challenges to startups and innovation sourced from and voted on by the public. The demographic was older than a typical tech hackathon, a symptom of the experience of the professionals involved.

Other participants have written about the energy and enthusiasm in the room – few have mentioned the intense, palpable goodwill. I am a hackathon newbie but I have worked in policy development – and this was completely unique. The openness among participants, facilitators, and government employees was incredible.

It felt like we all wholeheartedly, honestly believe(d) that change is in the air for innovation; that this PolicyHack really would be the start of something.

I was a part of a group looking at ways that we could promote international collaboration and learning in the Australian startup community. Our MVP was the creation of landing pads in hot-spots around the world (e.g. San Francisco, Beijing) to give Australian entrepreneurs a place to land when they arrive. Many countries already do this, and it is having an impact on the success rates of their entrepreneurs. The cost was estimated at $450k per location per year, sourced from a combination of government support, corporate sponsorship, and ‘user-pays’ revenue.

We had so many ideas, but too little time…

Yet what was most interesting were the ideas that surfaced in the brainstorming. There were a host of problems identified and furious agreement about the importance of solving them to keep entrepreneurial talent from moving overseas. Ideas varied from the recommendation to set up a bi-partisan National Innovation Agenda that focuses on key industries in which Australia has a global competitive edge to the removal of sophisticated investor requirements for investments in private companies. It would be fascinating to know how many of these ideas the 10 groups had in common.

It was a productive experiment in policymaking

From the perspective of a participant, it was a fantastic exercise firstly, in networking – and secondly, in thinking about solutions through a policy lens.

I wonder how valuable the outcomes of our collective thought will be for policymakers – that is, those that are aware of government funding constraints and the practicalities and politics of partisanship and multiple government departments... constraints about which we are (blissfully) unaware.

The start of an agile approach to policymaking

At the OnMarket launch earlier this month, Prime Minister Malcolm Turnbull suggested that the best approach to policymaking was an agile one – that is, policies should be made on the basis of the best available information, and adjusted when they stop working, based on new and better information.

Considering the litany of legacy policies constraining innovation and entrepreneurship, this would be refreshing. More – policymaking is a process that entrepreneurs should be continuously contributing to in a forums that yield fresh and innovative ideas.

For that, a PolicyHack was a perfect fit. Combined with the goodwill generated, it was the best start we could have hoped for.

Let’s hope it’s a herald of what’s yet to come.