R3D Resources Limited (ASX: R3D) is acquiring Tartana Resources, a company which was established in 2007 and which has aggregated a portfolio of copper-gold exploration and mining assets in the Chillagoe Region in north Queensland. The objective of the acquisition is to grow R3D Resources into a significant copper-zinc producer through exploring and developing these assets.  Tartana’s projects vary in maturity with most advanced being the Tartana mining leases which contain an existing heap leach – solvent extraction – crystallisation plant being held in care and maintenance.  Work has begun to restart this plant to provide future cash flow through the sale of copper sulphate.

In Tasmania, Tartana has secured permits to excavate and screen to export a further 335,000 tonnes of low-grade zinc furnace slag/matte from its Zeehan stockpiles in Western Tasmania, and recently commenced its 5th 22,000 tonne shipment of zinc slag to South Korea. 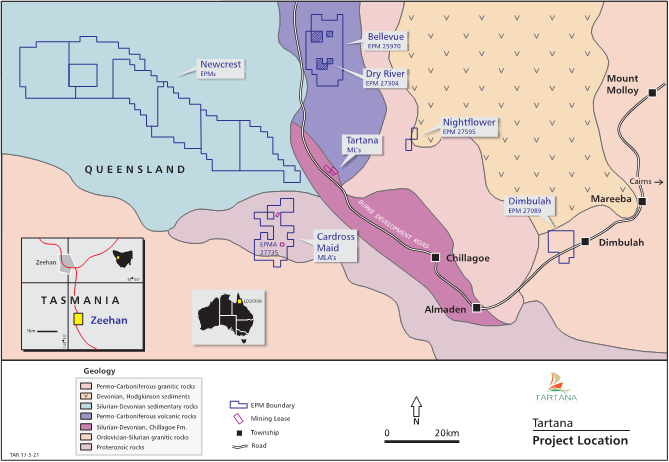 R3D Resources Limited is conducting a reverse takeover of Tartana Resources and at the same time is conducting a capital raising through a prospectus to raise $4.25 million via the issue of 21.25 million shares under the Offer at an offer price of $0.20.  The company is also offering Options on a 1 for 5 basis, exercisable at $0.40 within 5 years from the date of issue. The company will have an indicative market capitalisation of approximately $21.46 million on completion of the offer.

R3D Resources Ltd (ASX: R3D) is an ASX listed company. On 2 March 2020, the Company’s securities were suspended from trading on the Official List of the ASX. In February, the company commenced a formal takeover of Tartana Resources Ltd. As a result of the Company’s proposed acquisition of Tartana Resources, the Company obtained Shareholder approval for a change of nature and scale of activities and is required to comply with Chapters 1 and 2 of the ASX Listing Rules for re-admission to the Official List.

R3D Resources lodged a prospectus in February this year, which was oversubscribed, but unfortunately had to withdraw it following some concerns raised by the ASX. These concerns have been addressed in this document.  The offer is being undertaken to recapitalise the Company (and to allow reinstatement on the ASX)

Tartana Resources was revitalised in September 2017 with the objective of becoming a significant copper, gold and zinc company. The project portfolio has taken more than three years to assemble and provides an exciting base for our future growth.

In addition, it has two earlier stage small exploration properties: R3D Resources will be led by a Board with management that has extensive experience in geology and mining in a variety of commodities and has ready access to metallurgical processing and product marketing expertise.  At the Completion of the takeover and ASX re-admission the Board will comprise of:

Richard Ash has more than 30 years of experience in funds management, finance and principal investment in Australia, Asia and the UK. Prior to forming AAP Capital to advise Family offices on investments, Mr Ash was a Managing Director, Head of Asset Finance for Developed Asia and a member of the Australian executive team for Nomura Australia. Richard is Chairman of Lakes Blue Energy. He has also worked at Westpac, Macquarie Bank and KPMG.  Richard has a keen interest in decarbonisation and the associated structural change

Steve’s professional experience spans more than 30 years covering periods in both the mining industry and financial sector. With a geology background, Steve has worked in exploration, feasibility and evaluation studies and mining in a range of commodities and in different parts of the world. In the financial sector, Steve has been involved in research, corporate transactions and IPOs spanning a period of more than 20 years, including senior roles at JPMorgan, Bankers Trust and Macquarie Equities.

Bruce is an accountant and is currently an Executive Director of Breakaway Investment Group Pty Limited which operates the Breakaway Private Equity Emerging Resources Fund. Bruce is a Director of a number of unlisted companies in the mining and financial services sectors including The Risk Board and Stibium Australia. Bruce has 35 years’ experience in the financial sector including 20 years in the banking industry primarily in the areas of strategy, finance and risk.

Robert Waring has over 40 years’ experience in financial accounting and company secretarial roles, principally in the resources industry.  He is involved as Company Secretary of a number of public companies listed on the Australian Securities Exchange.

Mr Thirnbeck is an experienced geologist with over 25 years in managing numerous mineral development projects in Papua New Guinea, Indonesia and Australia. He has been a Member of the Australasian Institute of Mining and Metallurgy since 1989 and holds B.Sc. (Hons.) degree from University of Queensland.

Tom has 40 years’ experience in the mining and exploration industries in Australia and Asia Pacific rising to Chief Geologist of a public company before becoming a consultant. He also spent 12 years in DNRME Mining Tenure Unit rising to Director. Tom has a number of significant discoveries under his belt, as well as a reputation for progressing projects through from exploration to feasibility and then development and mining phases. Tom has put the discovery drill holes into multiple deposits in Queensland including the King Vol zinc deposit, Beaverbrook, Monte Video and the Tartana Heap Leach copper oxide.

You are encouraged to read the Prospectus carefully as it contains detailed information about the Company and the Offer. Like all investments, an investment in the Company carries risk. As set out in Section 4 of the prospectus, R3D Resources Limited is subject to a range of risks, including but not limited to re-quotation of shares on ASX, competition risk, capital structure, reliance on key personnel, exploration and development, development and acquisition opportunities and Tenements, Native Title and Land access and environmental risks.

1Question is an app that leverages existing screen habits to create micro learning moments. Lots of them. Every. Single. Day. Advanced AI understands the student’s strengths and weaknesses and customizes questions to accelerate learning.

1Question is backed by the Google accelerator program for User Acquisition. They are a company that is born global with a first mover advantage and a gigantic total addressable market.

Since inception, SPP Harvester clients have earnt an average 13.1% on the capital invested in SPPs, over an average holding period per SPP of 22 days.

IPO underwritten up to approx $48.6 million. OnMarket has a limited allocation.

Tamboran Resources Ltd (ASX: TBN) is a public company that intends to play a constructive role in the global energy transition towards a lower carbon future by developing low CO2 unconventional natural gas resources in the Beetaloo Sub-basin in the Northern Territory of Australia.

With interests in three exploration permits, including a JV with Santos at EP161, Tamboran has estimated net prospective resources of 31 Tcf. Their aim is to provide affordable gas to local Northern Territory markets and supply gas to the east coast of Australia to meet forecast domestic gas shortfalls.

R3D Resources Limited (ASX: R3D) through the acquisition of Tartana Resources Limited aims to become a significant copper-gold explorer, developer and producer in the Chillagoe Region in North Queensland.  These projects vary in maturity from granted mining leases, mining lease applications and exploration permits. The Tartana mining leases contain an existing heap leach – solvent extraction – crystallisation plant which has been held in care and maintenance since 2014. Work has begun to restart this plant to provide future cash flow through the sale of copper sulphate.

In Tasmania, Tartana has secured permits to excavate and screen to export a further 335,000 tonnes of low-grade zinc furnace slag/matte from its Zeehan stockpiles in Western Tasmania, and recently commenced its 5th 22,000 tonne shipment of zinc slag to South Korea.

goPassport is a unique and highly relevant travel risk SaaS platform in the new Travel/Health Tech space. The business started at the outset of Covid in March 2020 and has since built out a powerful, complex but user friendly & scalable software following the successful crowd sourced equity raise of $0.8m.

Having engaged deeply with key levels of state & federal government, travel industry, health authorities and border protection agencies, goPassport is now well placed to play a vital role in the reopening of borders and the recommencement of the international travel industry.

People spend big on wellness (it accounts for 5.3% of global economic output). But, 80% of consumers find the market is full of conflicting data, making this spend haphazard. Solving this problem is the emerging wellness genomics sector - a high-growth market (13.2% CAGR), predicted to hit US$9 billion by 2026.

Meet Fitgenes. With a range of wellness focus areas, Fitgenes’ genomic products cut through the clutter - delivering wellness plans tailored to the specific requirements of an individual. But it is the distribution network and strategy that sets this growing heath-tech business apart.

Finally, a super fund for the
self-employed

Unlike Big Super, GigSuper attracts younger members, with a lifetime of saving ahead of them – more money coming in than going out.

Did you know that:

Working with ground-breaking Finnish Cleantech, Tracegrow Oy, Renutrients will be raising funds soon to build a plant in Australia - bringing this proven, high-performing fertilizer to capture a fair share of the $180M market.

Polymetals Resources Ltd (ASX: POL) owns two exploration licences within the Siguiri Basin in Guinea, West Africa. The Siguiri Basin occupies the north-eastern corner of Guinea and hosts several large active gold mining operations and is notable for its widespread gold anomalism. The region is considered prospective and relatively immature from an exploration perspective and produces over 500,000 oz of gold/year. The nearby AngloGold Ashanti Siguiri Gold Mine, has produced more than six (6) million ounces over its 20-year life.

The licence area is host to many historic and current small scale gold mining operations. The results of inititial soil sampling confirmed that 18 km2 or 16% of the area surveyed reported gold values in excess of 40ppb Au.