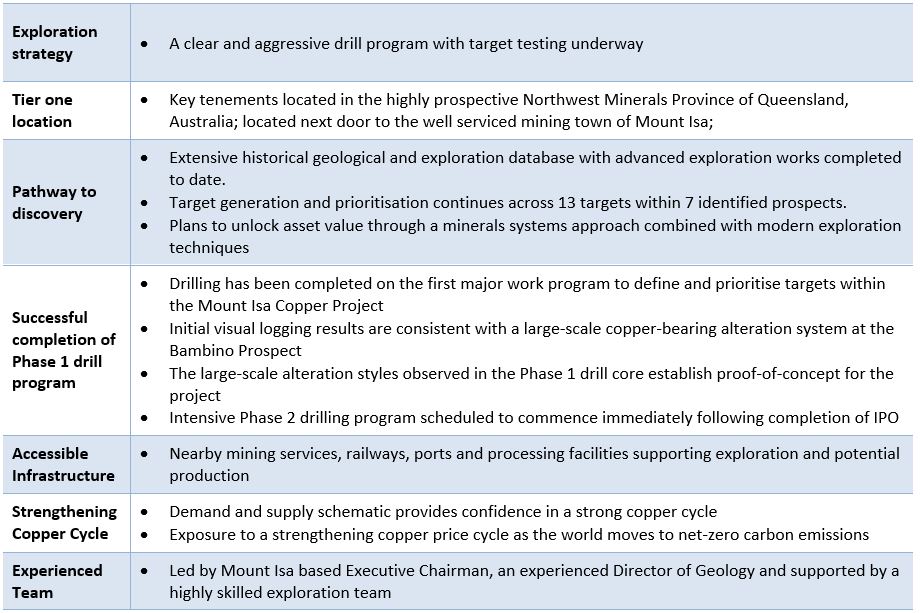 Chalkos Metals Ltd (ASX: CKM) is an Australian resources exploration company targeting copper and base metals at its wholly owned Mount Isa Project located adjacent to Glencore’s Mount Isa mine in Queensland. The Project currently consists of 7 identified prospects with 13 targets for mineralisation.  The company brings a new approach to mining by directly and decisively testing the mineralisation occurrences with geophysical datasets and an atypical hybrid IOCG-orogenic mineralisation model as guidance.

The Company has raised ~$1.6 million in seed funding which it used to complete a shallow induced polarisation survey across two targets at the Frida prospect, collate previous exploration results and fund a 7 hole diamond drilling program that commenced in February 2022 to test 3 of 13 identified priority targets at the Mount Isa Project. Drilling is expected to be completed by Q3 CY2022, with initial assay results anticipated to be available from Q4 CY2022, post the Company’s IPO.

Chalkos Metals Limited is looking to undertake an IPO on ASX to raise between $6 million and $8 million via the issue of 30 million and 40 million shares under the Offer at an offer price of $0.20.  The company will have an indicative market capitalisation of approximately $16.3 million on completion of the offer at the maximum raise amount.

The Mount Isa Project is centred approximately 12km west of the city of Mount Isa and approximately 900km west of the port facilities at Townsville. The district has a long history of copper production, and Mount Isa is the district's major regional administrative, commercial and mining centre. In addition, the town is an adequate base from which to conduct exploration activities (air service, transport, accommodation, supplies etc.).

Work by Chalkos Metals to date has indicted that there is substantial copper mineralisation west of the Mount Isa Fault that does not fit the SHMS deposit model, and previous exploration techniques and assumptions may have overlooked much of the potential of the area.

The Chalkos Metals Mount Isa Project hosts many outcropping copper mineralisation occurrences, suggestive of large-scale migration of copper-bearing fluids through the rock mass. The copper occurrences are in a range of host rock types, most notably on intrusive pegmatite contacts and within vein stockworks in dolerite.

The Company commenced a 7 hole diamond drilling program in February 2022 to test 3 of the 13 identified priority targets. Drilling is expected to be completed by Q3 CY2022, with initial assay results anticipated to be available from Q4 CY2022, post the Company’s IPO.

Chalkos Metals works with a “Mineral Systems” approach. The emphasis is on critical geological elements to form a deposit rather than absolute conformity to a deposit model. These critical elements are:

The Mount Isa Project becomes very attractive for exploration when applying this mineral systems approach, particularly given that the nearby Mt Isa Copper orebody is implicitly a manifestation of the same mineral system, albeit with a very different geological character.

Chalkos Metals intends to undertake a 7,000m, 27 hole diamond/RC drilling campaign, commencing in CY2022, to test the remaining 10 priority targets over the 7 prospects identified at the Mount Isa Project (Dali, Goya, Friday, Eldorado, Bambino, Federol West and Turpentine), and intends to execute a drilling contract in the near future to that end.

Chalkos Metals’ objectives are to:

On completion of its immediate objectives, the Company’s longer-term goals over the next 2 – 4 years following IPO are to:

Chalkos Metals Ltd has assembled a well-qualified and balanced board and senior management team with proven corporate, technical, financial and commercial expertise ideally suited to maximising the value of the Company’s Mount Isa Project.  These include:

Andrew Newman has 20 years of finance and operational experience in the mining and resources sector. He has held senior roles in Australia and North America and was most recently the CFO for Glencore’s QLD Metals Division and Board Director for Glencore Technology. Based in Mount Isa and overseeing operations in Northern Australia, Andrew was financially accountable for the copper, zinc, lead value chain encompassing the Mount Isa Mines & George Fisher complex, Lady Loretta Mining, Ernest Henry Mining and the Townsville Copper Refinery and port assets.

Rick Gordon held management positions with Northern Star Resources as the Geology Manager for Kanowna Belle underground gold mine and as the Exploration Manager for Kalgoorlie. During his time at Northern Star (and its predecessor Barrick Gold), Rick was a key part of the teams that discovered the Pegasus orebody in 2012, Paradigm North satellite orebodies in the Carbine-Carnage area, and the 2014 Millennium discovery which led to the re-establishment of the Kundana Mining Centre. Before Northern Star, Rick spent five years with IGO Long Nickel mine as a Mine Geologist and Senior Mine Geologist and was a key part of the team that added significant mine life with extensions to the McLeay and Long North orebodies and discovered the Moran orebody. Rick graduated from the University of Queensland with BSc(Hons) in 1999 with a passion for structural geology and completed his PhD which included unravelling the polyphase deformation associated with the Mount Isa Fault System.

Keith Middleton is a corporate advisor and director of ASX listed companies specialising in the Australian and International resource sector. He has extensive experience in financial analysis, risk management, major capital works expenditure, corporate governance and ESG regulations. He is the former Managing Director of American Rare Earths (ASX:ARR) where he had direct accountability for mining operations and exploration activities coupled with strategy formulation, project evaluation and investor relations. He is a former Director of Redbank Copper (ASX:RCP) and a current director of Pacific American Holdings (ASX:PAK).

See ‘Summary of Offer’ section of the Prospectus for further information.

For further information on the Key Offer Statistics and Use of Funds, please see the prospectus.

You are encouraged to read the Prospectus carefully as it contains detailed information about the Company and the Offer. Like all investments, an investment in the Company carries risk. As set out in Section 6 of the prospectus, Chalkos Metals Ltd is subject to a range of risks, including but not limited to exploration and development risks, key personnel, liquidity, commodity price, exchange rate, COVID-19 and the risk of requiring additional capital.

Chalkos Metals Ltd (ASX: CKM) is an Australian resources exploration company targeting copper and base metals at its wholly owned Mount Isa Project located adjacent to Glencore’s Mount Isa mine in Queensland. The Project currently consists of 7 identified prospects with 13 targets for mineralisation.

Synergen Met Ltd (ASX:SH2) is an Australian owned and operated clean-tech business using its thermal plasma technology for two key applications; the production of “Clean Hydrogen” utilising renewable energy, and the cleaning of the environment by destroying toxic chemicals, such as PFAS, that cannot normally be eliminated.

BookitDoit’s Regional Australian booking platform aggregates thousands of experiences across all regions, states, and territories - filling the virtual gap and enabling Aussies and international visitors to find, book, and do the authentic experiences ‘real Australia’ has to offer.

Harnessing the power of AI for property buyers, farmers and graziers.

Spatial Hub's Geospatial AI tool turns environmental data into solutions that relate to where we live, work, and elements that we interact with.

What makes them unique is how they layer this data over time and use learnings from history to make better future decisions.

Neutrog is a leading producer of organic and biological fertilisers. Over 35 years, Neutrog have grown into a premium brand with a high level of market visibility and trust.

The MetalsGrove Mining Limited (ASX:MGA) IPO has successfully closed.  The shares will be allotted in late June with the ASX approved listing date set for 1pm on Wedensday 6th July (AEST).